It was meals of wheels with a twist at Crinnis Beach as two well-known St Austell businesses joined forces to move a new venture into place.

The shipping container turned eating joint was moved into its final position by crane. 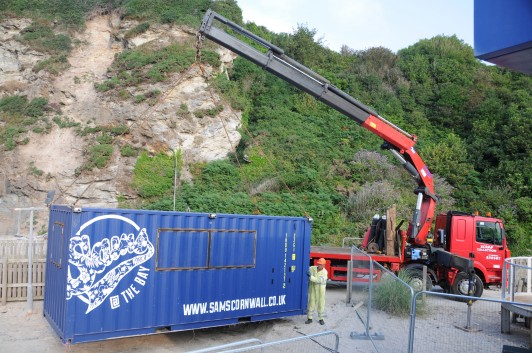 “I think this must be the first time we’ve been asked to put something in place.

“Hopefully, we’ll be able to get priority seats at the new restaurant when it opens!”

Sam’s, which is run by Sam and Emma Sixton, has restaurants at Polkerris, Fowey, Truro and now at Crinnis Bay.

Managing director, Emma Sixton, said: “We’re really grateful to Henry and his team for helping move the container into its final position.

“The haulage company had done a great job getting it down to the beach, but it was the final stretch that just needed the help of a big crane.

“It certainly puts a new twist on meals on wheels!”