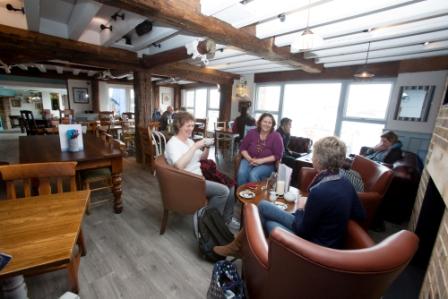 A popular hotel and pub on the Isles of Scilly has unveiled its contemporary new look in time for the start of the holiday season.

The Atlantic, in the heart of St Mary’s, has undergone a modern makeover, giving it a bright and airy feel and making the most of the uninterrupted island views.

St Austell Brewery, which owns the historic pub and 24-bedroom hotel, has invested in the business to give it a new lease of life for the tourist season.

The heart of work was focused on reconfiguring the structural layout of the building, which now better links the hotel and pub areas giving it a more open feel and flow.

Manager, Neil Moorton, who will be spending his third year on the islands, said: “We are very proud and excited by what has been achieved at The Atlantic – it looks fabulous and really does showcase the best of what we do.

“The whole team is looking forward to welcoming customers old and new as we prepare for the busy season ahead.”

The evolution took place over the winter months while the hotel was closed and the bar remained open.