Organisers of this year’s Truro and Penwith College Fal River Festival are planning its biggest ever opening to kick start the celebrations.

The festival’s traditional Beer Fleet launch, which sees a flotilla of boats sail from Truro to Falmouth with a ceremonial cask of Skinner’s Brewery beer, will have a record number of boats this year.

Taking place on Friday, May 24, the event, which marks the start of ten days of festivities, will also feature a tall ship for the first time.

The 116ft Bessie Allen, an eight-sail trading ketch, will form part of the flotilla.

Built in 1904, Bessie Ellen is one of the last three surviving Westcountry trading ketches, out of a fleet of 700, still sailing today.

She continued to run cargoes under sail through both World Wars until 1947. In 2000 she underwent a two-year restoration project to bring her back to her former glory.

“It’s a great event and it’s fantastic to see so many boats and crafts of all shapes and sizes taking part and bringing a real sense of celebration into Falmouth from the water.”

Truro and Penwith College Fal River Festival’s co-ordinator, Dot Peryer, added: “The Beer Fleet is an event that sticks in people’s minds and gets them in the mood for the festivities that follow. “This year we have the Bessie Ellen joining us, as well as plans to create the biggest flotilla ever.

“I think it has the potential to go from the Beer Fleet to the Beer Armada!”

The festival, which celebrates life on and around the Fal River features around 150 events over 10 days and regularly attracts over 100,000 visitors to take part. 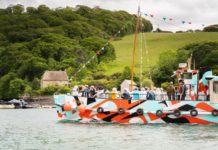