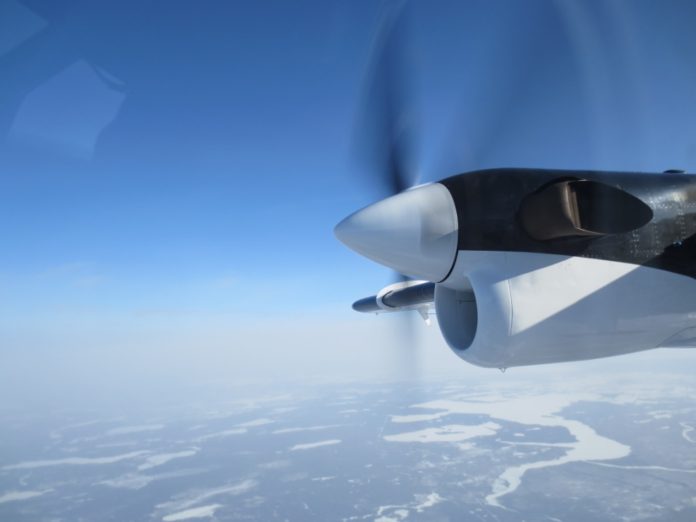 The latest aircraft to service the 28-mile route from Land’s End Airport to the Isles of Scilly is due for delivery next week – once it completes an epic 4,500 mile flight from its current home in Canada.

Skybus, which has operated year-round flights from the UK mainland to the Isles of Scilly since 1984, is taking delivery of a fourth 19-seat De Havilland Canada DHC-6 Twin Otter.

The aircraft left Calgary in Alberta at 10.25 pm (GMT) last night (April 4) and completed its first 457 mile leg to La Ronge in Saskatchewan in the early hours of this morning.

Today (April 5) it hopes to make the 1,400 mile flight from La Ronge across Hudson Bay to the arctic city of Iqaluit, with a fuel stop en route.

The journey to the UK will take five or six days in total, involve 26 hours of flying and include stops in Greenland and Iceland. Because the aircraft has a normal operational range of around 650 miles, it has been fitted with a giant fuel tank holding 1,576 lbs of fuel and taking up half the space inside the 19-seat passenger cabin.

This will increase its range by around 500 miles, allowing it to make the critical sea crossings between Greenland and Iceland (832 miles) and Iceland to Prestwick Airport in the UK (855 miles) before the final 325 mile leg to Land’s End Airport.

The Twin Otter, which is powered by two 680 horsepower Pratt & Whitney turboprop engines, will fly at between 5,000 and 18,000 feet depending on cloud, ice, winds and terrain, including the Greenland icecap which goes up to 13,000 feet. If necessary it can operate at 25,000 feet with oxygen. The aircraft has a wingspan of 65 feet and is almost 52 feet long.

It is being flown by Canada-based Doug Cochrane, a veteran Twin Otter pilot of British Antarctic Survey expeditions, accompanied by Mick Yould, engineering manager at Skybus who has been in Canada since March 19 preparing the aircraft for its epic flight.

Jeff Marston, chief executive of the Isles of Scilly Steamship Group, which owns and operates Skybus and Land’s End Airport, said: “We already operate three Twin Otters and having a fourth will give us more flexibility on our routes from Exeter, Newquay and Land’s End to St Mary’s.

“It’s a great aircraft for us because of its short take off and landing capability but they are not easy to get hold of because they are so popular, which is why we had to go to Canada.”