The company behind one of Cornwall’s leading discount apps believes it can help boost tourism to the county in the year ahead.

Launceston-based Branch Media, which launched the Voucher Tree app in July, now has over 25,000 users and is growing by 1,000 users per month.

And to prove how well the app is doing, Branch Media’s managing director, Scott Lehnhoff, has revealed the top ten locations across the country where downloads have been made.

“There has been a great deal of interest from the London area with the city, Kensington and Lambeth,” said Lehnhoff.

“But there has also been a great deal of interest from locations that could be considered as tourist destinations, such as Bath, Southampton and Bournemouth.

“What’s great is that as well as this interest from these locations, the business in Cornwall that have signed up to the scheme are seeing an impact with vouchers being redeemed.”

The app’s success has been hailed by Visit Cornwall’s chief.

Malcolm Bell said: “Businesses in Cornwall need to adapt, particularly in this economic climate, to encourage visitors to come to the county.

“This app allows businesses to do exactly that and it’s encouraging to find out that visitors are accessing the app and vouchers before they travel in order to enjoy offers and get the most out of their stay when they are here.” 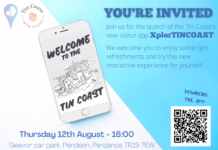