A family-owned Cornish business has sounded an optimistic note for the county’s tourism industry with a £4 million pound investment programme involving up to 30 new jobs at three locations.

Newquay-based Faronpark Ltd has submitted a planning application for a £1 million development project at its Lewinnick Lodge overlooking the town’s Fistral Beach.

The company wants to upgrade Lewinnick to create a boutique hotel – including ten holiday-let bedrooms and a manager’s flat – in addition to the existing bar and restaurant.

At Porthcothan near Padstow, Faronpark has just won planning permission for a £2 million scheme to rebuild its Tredrea Inn, doubling its restaurant capacity to 120 seats and creating eight letting rooms.

This scheme will provide up to 15 new jobs, taking the total staff level to 25. Lewinnick Lodge currently employs 50 people all year round and the proposed development would result in up to ten new jobs.

At the Plume of Feathers bar, restaurant and accommodation complex at Mitchell, in mid-Cornwall, Faronpark has spent over £800k in the last 11 years in restoring a business that had been badly hit by a new section of the A30 that took traffic away from the village.

Since 2000, the Plume has been built up from just three employees to its present 20, with developments including major expansion of its restaurant. The company will shortly submit a planning application for a further £1 million investment there involving 20 holiday-let rooms, leading to five more jobs.

Faronpark managing director Peter Fair said the Newquay scheme had been prompted by dramatically changing trends in the holiday industry, with a “massive surplus” of finished and part-finished apartments in the town, together with hotel closures.

“We already have planning permission secured a number of years ago for two luxury residential apartments, but the new plan takes account of the greatly changed economic picture since then and the consequent shift in accommodation trends,” explained Fair.

“Many of the traditional elements of Newquay’s tourist industry have sadly declined, but despite the current gloomy outlook generally we for one are prepared to back our faith in the resort’s future with this major investment.” 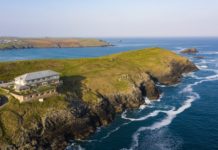