The only stand representing Cornwall in a major tourism and leisure show at the National Exhibition Centre in Birmingham has been hailed a huge success.

Not only did participants report encouraging feedback to reinforce hopes of a much-improved year for the industry, but five of them also collected prestigious awards.

“Everyone taking part was so delighted with the response that we immediately re-booked for 2010, with a larger stand to accommodate more partners,” said Twenty Twenty director Sara Cross.

“Visitors were delighted to see a Cornwall stand and many said they would be coming to  Cornwall this year, along with a huge number who had already chosen Cornwall and wanted more information.  The stand also attracted considerable press interest, which VisitCornwall is now following up.”

VisitCornwall rated the stand’s success a positive sign for the year ahead, demonstrating the county’s continuing huge appeal as a visitor destination.

“The challenge now is to convert that interest into bookings but early indications are good and the caravan and camping sector, which has traditionally been an important market for
Cornwall, looks set to grow in popularity during these times of economic uncertainty,” said VisitCornwall marketing assistant Theresa Thompson.

Lorna Brokenshire, of Trevornick, commented:  “Bookings have continued to rise since the show and we are looking forward to possibly one of our busiest seasons in many years.  We were all very encouraged by the number of people we spoke with who were expressing an interest in coming to Cornwall or returning after several years of holidaying elsewhere.”

Will Dexter, of Hendra, reported:  “Our booking numbers have been fantastic for 2009, particularly for low season weeks and short breaks.  This indicates that Cornwall is heading for an excellent season.”

Chris Cousens, of Dolbeare, said the event had proved “a fantastic opportunity” to promote Cornwall. She was thrilled that Dolbeare was judged No. 8 in the Practical Caravan Top 100 Parks and was Cornwall regional winner, ahead of two other Cornish finalists, Hendra and Trevella.

Five parks – Hendra, Trevornick, Porth Beach, Trevella and Newperran – also received their Premier Parks plaques from Warner Publications.  There are only 17 Premier Parks in the whole of the UK, promoted through Warner’s Motorhome and Motorcaravan Monthly, Which Carvan and Which Motorhome .

Over a thousand people took part in a prize draw at the Cornwall stand.  Prizes totalled £2,680 in value, ranging from £50 to £700 and also including a Cornish food hamper supplied by Simply Cornish Hampers, of Redruth.

“With the economic downturn threatening to bite into booking levels and turnover opportunities, we felt it was vital to be proactive and target every opportunity to bring returning and new customers to Cornwall,” said Sara Cross.

“The Birmingham event is the largest of the niche market shows, attracting 96,000 visitors and occupying six halls at the NEC.  Exhibition visitors want information about holidays in Cornwall, but until now there has often been no outlet here to promote Cornwall specifically.” 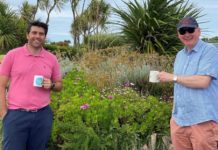 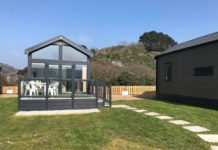 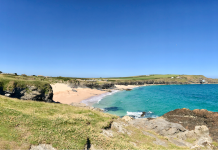