The Isles of Scilly Steamship Group has announced a £200,000 investment in Penzance Dry Dock.

The dock, which was established in 1834 and is among the oldest in the UK, will have its roof and sides completely replaced with high specification plastisol coated steel sheeting.

Penzance-based Celtic Scaffolding will be erecting scaffolding around the dock ready for work to start on the project in early August, with contractor JDB carrying out the roofing and recladding. It is expected to take two to three months to complete.

Rob Goldsmith, chief executive of the Isles of Scilly Steamship Group, said: “Penzance Dry Dock occupies a prominent position on the waterfront and the approach to Penzance Promenade and our investment will not only improve its appearance but create a better working environment. The dock is an important part of our business providing a valuable maintenance facility for our own vessels and for numerous others in the local area so we are looking forward to the start of work.”

The Isles of Scilly Steamship Group acquired the lease for the dry dock business in 2009, saving it from administration. The Dry Dock provides a wide range of ship repair, fabrication and welding work, including land-based contracts such as the new railings for Penzance promenade.

The business employs 15 staff and recently won a contract to supply a range of fabrication and construction services to the Penzance Jubilee Pool, which is undergoing a £2.9 million restoration having been severely damaged in last year’s winter storms. 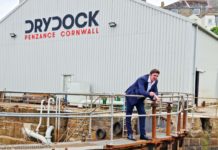