The campaign for a better train service for Cornwall, plus sorting out dangerous congestion on the A30 Chiverton-Carland Cross section, were on the menu for breakfast this week.

In the second of two meetings this month with the Minister  of State for Transport to discuss much needed improvements to rail and road services in the county, Truro and St Austell MP Matthew Taylor took Lord Andrew Adonis for breakfast at the Three Rivers Café in Truro, after meeting him off the sleeper.

Taylor told the Minister that the rail network is fundamental to the Cornish economy and that it was vital that the Government confirm an order to replace the  aging  Intercity 125 fleet for the south west urgently. Last month, Ministers announced new trains for Bristol and Cardiff services, but not services further west, raising fears the mainline to Devon and Cornwall could be downgraded.

The Minister agreed new trains are urgently needed to ensure that the service offered to Cornish rail users is the same standard as the rest of the country, and to improve times to London as well as better reliability. Lord Adonis confirmed that detailed proposals for a new intercity fleet serving Cornwall and Devon are in the pipeline.

Lord Adonis asked the Taylor to provide details of the congestion at Chiverton Cross afflicting traffic from west Cornwall and St Agnes, so he can consider what action he can take to help. Taylor said he is optimistic the meeting can help lead to solutions to these problems sooner rather than later.

Taylor said: “Now more than ever, in a time of recession Cornwall’s road and rail links need vital investment for improvements from the Government. The county’s train services provide a crucial link with the rest of the South West and the country at large and these links are an important support for Cornwall’s economy. Similarly, road congestion is bad for safety, bad for the environment as it increases emissions, and bad for business.

“During the height of the tourist season, Cornish businesses rely on the train and road networks to get tens of thousands of tourists to and from the county. Year round local business people rely on good quality transport links to take Cornish business all over the country.

“The breakfast at the Three Rivers Café helped get the Minister’s day off to a good start –  it also helped me make the best case for Cornwall’s road and rail network, and the news on replacement Intercity trains certainly made my day.” 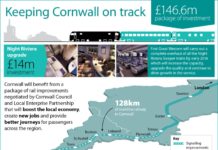