Trevenson Moor garden centre has been celebrating its first year in business.

The garden centre, near Tehidy, was re-opened as a new business last October by Kevin Ball, who had worked for the site’s previous owners Lynne and Chris Stevenson since the age of 15.

In its first year of trading, Trevenson Moor has established its product range bringing in home and garden products as well as plants and giftware, created three jobs for local people and launched an online shop enabling nationwide sales.

Ball, who took a horticulture course at Duchy College and went on to study landscape design at the Eden Project, said: “When I took on Trevenson Moor I wanted to create an inspirational shopping experience offering products which customers might not expect in a Cornish garden centre.

“I researched what leading centres throughout the UK and Europe were doing, but the Stevensons also taught me the value of operating as a local, independent business with a welcoming atmosphere and that’s what we aim to do.”

The developments at Trevenson Moor are ongoing, with the addition of a new coffee shop subject to planning permission due to be added in the near future. 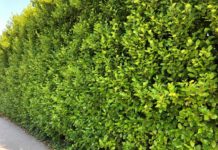 Could Cornwall become a hedging hotspot?