Alun Jones has been appointed as the new manager of Truro’s Business Improvement District (BID).

He will be responsible for the delivery of key projects including a new city centre signage and interpretation project, the annual festive lighting scheme and a number of other key projects designed to improve the city for businesses, residents and visitors.

Jones joins the Truro BID with a wealth of retail experience, having spent the past 30 years of his career in varying managerial roles within national brands, and ten years within Truro, including spells as the manager of Woolworth, Argos and most recently Dunelm.

He said: “I’m delighted to take up the position and look forward to continuing the great work already achieved by the current BID team and I look forward to working alongside all the business and the communities within Truro.”

With the current five-year funding for this BID term due to end in September 2017, Jones will also take the lead in the renewal campaign for a third BID term in the city.

Totally Truro chairman, Russell Holden, added: “We are delighted to welcome Alun as the new BID Manager for Truro.

“He has a wealth of experience within retail and knows and understands Truro very well. We are excited to see what he brings to the role and we believe he will be a positive and valued ambassador for Truro going forward.” 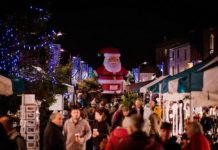