The team behind Cornwall Food & Drink has announced details of a new store dedicated to selling some of the finest fresh Cornish produce.

The Great Cornish Food Store will be located alongside the new Waitrose outlet at the Tregurra Park and Ride on the eastern edge of Truro, opening this summer.

With a strong focus on fresh produce, the retail development is not only the most ambitious project dedicated entirely to local food and drink that Cornwall has ever seen, but a first in food retail nationally too.

The move is being led by Cornwall Food & Drink’s MD, Ruth Huxley, who has appointed an experienced team to help run the new business.

At the helm will be Angie Coombs, known to many for her role as general manager of the Duchy of Cornwall Nursery and Café, and formerly leading Taste of the West’s Cornwall operation.

Renowned chef, Paul Ripley, will be overseeing the in-store café, deli and food-to-go area, bringing his Michelin-star quality to a new informal way of shopping and dining.

Claire Vickers, former head of marketing at Jamie Oliver’s Fifteen Cornwall, will lead the marketing and promotion of the store and of the wider food and drink industry of Cornwall.

Philip Warren and Son, the well-known butchers and farmers from Launceston, will be overseeing the procurement of fresh meat from Cornish farms with traditional methods of maturing and butchery.

Commenting on the move, Huxley said: “This is a fantastic opportunity to add a whole new dimension to our ability to celebrate and showcase Cornwall’s outstanding food and drink industry.

“For the first time, a comprehensive range of local produce will be available to people literally as they go about their regular supermarket shop, opening up tremendous new possibilities for the brilliant food and drink suppliers on our doorstep and new opportunities for shoppers who currently find it difficult to source all the local produce they would like.”

The task of fitting out the store and recruiting the rest of the team ready for opening is now under way. Anyone interested in supplying or working at the Great Cornish Food Store is asked to get in touch with Cornwall Food & Drink as soon as possible. 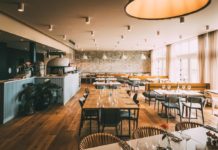 Taste of the West Gold for Una Kitchen