The chain, which has 201 stores across the UK and Ireland, will be opening its new £250k store on August 29 at the White River Place Shopping Centre in St Austell.

Last month the company announced that it was creating 3,000 new jobs as part of big expansion plans. At the same time, it made its first foray into the Duchy with the opening of a store in Launceston.

“We are delighted to be coming to St Austell,” said MD Hussein Lalani.

The retailer plans to mark the St Austell opening by offering a local youngster the chance to take part in a 99 second trolley dash around the store. 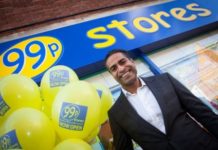