Local businesses are said to be concerned following news that the CCTV system in eleven Cornish towns will be cut.

Fears are growing that without the cameras being monitored the doors will be open to shoplifters and vandals and the safety of local streets will be compromised.

At a meeting held by Cornwall Council in December, it was decided that funding would be removed for the monitoring of CCTV. The towns affected are Camborne, Redruth, Falmouth, Hayle, Helston, Newquay, Penryn, Penzance, St Austell, St Ives and Truro.

Remploy, the company that currently monitor the CCTV system, were given notice by Cornwall Council last week. Their contract now ends on April 1, leaving the CCTV system unmonitored from that date forward.

Grant Ellis, director of Ellis Security, which installs and maintains CCTV systems, said: “With Council cuts inevitable, the individual businesses in these towns will have to think about their own security implications to ensure that potentially increased crime levels do not have devastating consequences.”

CCTV has a proven track record in reducing crime and catching criminals when incidents occur, and Gould Electronics, which helped to set up the Shopwatch system in many towns in Cornwall, is concerned over the coming CCTV cut.

“The loss of CCTV in Newquay is of particular concern as that may do significant damage to the Newquay Safe Partnership and in turn local business turnover.”

Local residents are also concerned about what impact this will have on their lives. Fay Swan, a local resident of St Austell, commented: “I would say that the cut in CCTV is a false economy. If there is no CCTV footage to refer to after a crime has taken place it will cost more in time and person power to get that same information, resulting in either the person not being found or the person getting off due to lack of proof.

“The money the Council will save by cutting CCTV will cause an inevitable increase in spending on police and court time.” 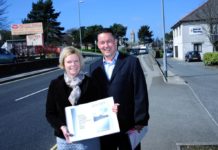