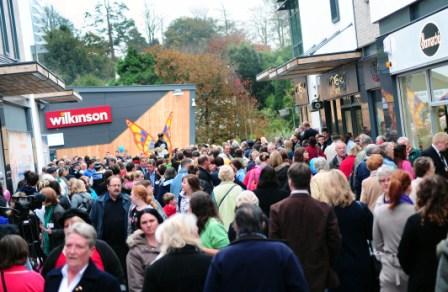 The scheme has seen a brand new Wilkinson store arrive in the town bringing with it 95 jobs. Other retailers opening today include Peacocks, Bonmarche, New Look and Halifax bank, with other stores in advanced negotiations to open in the coming months.

The Mayor, Cllr Brian Palmer marked the milestone by unveiling a commemorative plaque at the South Street entrance to the scheme, signalling the moment for thousansds of eager people to venture into the new shopping destination.

New Centre Manager, Claire Daniel commented: “This is a real landmark day both for me as the new Centre Manager, but also for me as a lifelong resident of St Austell. White River Place is bringing another dimension to our town centre; giving it the opportunity to compete with neighbouring centres and to profit from its proximity to nearby tourist hubs like the Eden Project.

“I wholeheartedly believe that its arrival will be of significant benefit to the town as a whole, both now and in the coming years.”

White River Place, which has been delivered through a partnership between the former Restormel Borough Council, the private investor White River Developments and the South West Regional Development Agency (SWRDA), has arrived both on time and on budget overseen by a steering group with an independent chairman.

Paul Scott, Chairman of St Austell Chamber of Commerce said: “At a time when urban regeneration and private investment in town centres is becoming ever thinner on the ground, this development has come at just the right time for us, making way for a better economic future for St Austell and a stronger town centre offer for residents and visitors alike.”

Sean Finlay, Director of White River Developments added: “White River Place is 65% let, and the substantial interest we have received from further regional and national retailers suggests that the figure may rise to 80% by Christmas. When considering equivalent figures for other new centres, many of which opened similarly well let in far more buoyant times, it becomes clear that White River Place is a definite hit with retailers, which is a great vote of confidence for the scheme and the town.”

SWRDA invested £31.5m in the £75m project, having recognised the opportunity it presented for St Austell and wider Cornwall.

Ian Piper, SWRDA’s director of development and regeneration, said: “Delivering this major capital investment project on-budget and on-time is a fantastic achievement and a real testament to the commitment of everyone involved in St Austell’s regeneration.”