The head of Skoda UK has warmly praised the “outstanding professionalism” of the new Skoda franchise operated from Carrs of Cornwall’s Indian Queens base.

Robert Hazelwood was paying his first visit to the state-of-the-art centre since Carrs was recently invited to take over the  franchise, which now covers the whole of Cornwall.

Hazelwood met staff in the various departments and was escorted around the site by Andy Barrett, Helston Garages Group (HGG) managing director.

“He was most impressed by what he saw,” said Barrett.  “He remarked how pleased he was to see Skoda being represented by a company with not only strong financial footings but also a very real affinity with the local area in which it operates.

“HGG has operated for almost 50 years now and our policy has always been to reinvest profits into making our businesses in the South West ones we can be really proud of in terms of facilities and service levels. We view every business and franchise we represent as very much part of our long term future.”<

Carrs has absorbed the Skoda operation into its Indian Queens centre that was opened three years ago as part of a £2 million investment programme that also involved 13 new jobs.  A further three were created with the Skoda development. 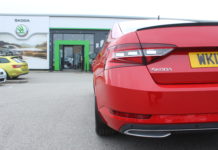