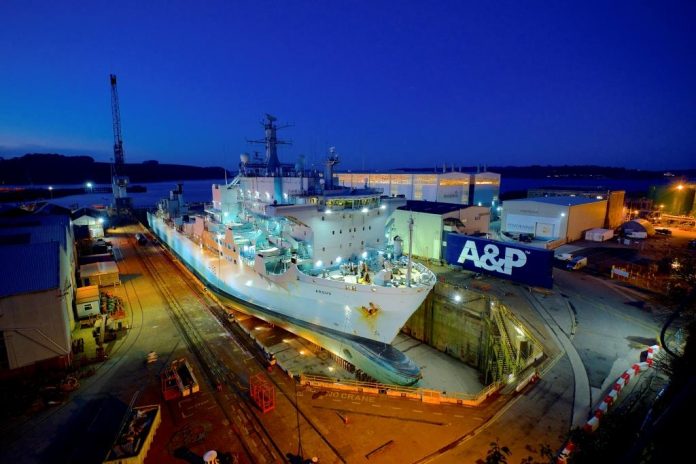 A&P Falmouth has been awarded a multi-million-pound contract to support a number of the UK’s Royal Fleet Auxiliary ships, plus the Royal Navy’s Ocean Survey vessel, sustaining vital jobs in the area.

These contracts form part of a wider £1 billion deal that will secure hundreds of jobs at shipyards across the country in support of the UK’s Royal Fleet Auxiliary ships, and the Royal Navy’s Survey and Hydrographic Fleet.

The ten-year In-Service Support contract will see A&P Group build on its long-standing relationship with the MoD and provide global maintenance support to these vessels.

The contract will be delivered by A&P Falmouth, which will now maintain four RFAs vessels and one Royal Navy vessel from Falmouth. This contract will assist A&P Falmouth in making a significant contribution to the local marine sector and Falmouth economy.

Mr John Syvret CBE, CEO of Atlantic and Peninsula Marine Services, said: “I am proud of the entire Falmouth management team and workforce on being awarded this prestigious contract, which allows the company to continue to build on the exceptional service delivered to our customer the Royal Fleet Auxiliary over many years, and will underpin the A&P Falmouth business for the next decade to come”.

MD David McGinley added: “Securing the new FISS contract is testament to our team’s unique understanding of the RFA’s requirements and is the result of a collaborative relationship with the MoD that has always been based on shared objectives.

“As a competitive and commercial ship yard, we will continue to provide the MoD with significant efficiency gains and cost-savings under the terms of this contract.”

To date, A&P Group has carried out eight major refits and 117 maintenance packages on RFA ships, completed 39 overseas work packages and managed and installed more than 500 alterations and additions packages.