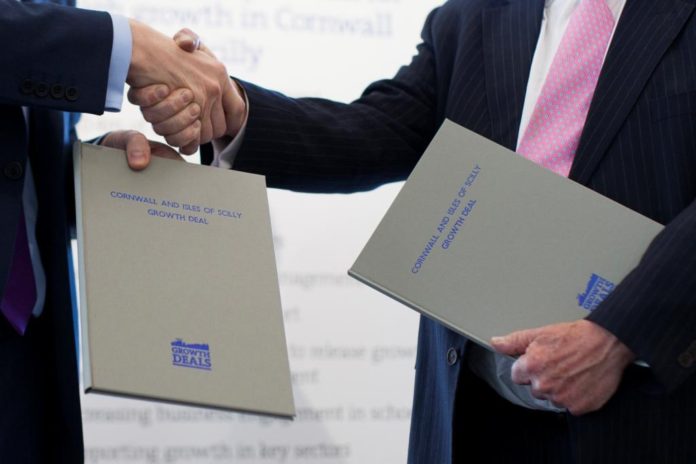 Clark, Minister for Universities, Science and Cities, today (Oct 7) joined with Council and business leaders to sign the £198.9 million Growth Deal, at the Penryn Campus in the University of Exeter’s Environment and Sustainability Institute.

The deal secures £48.9 million of Government funding, as well as a further £150 million of additional investment from local partners and the private sector.

Clark said: “I am delighted to be in Penryn today to sign this historic deal. As the Government’s long-term economic plan starts to bear fruit, it is important that areas such as Cornwall and the Isles of Scilly have the power to develop local infrastructure to take advantage of a recovering economy.

“Cornwall and the Isles of Scilly are at the very edge of Britain but are by no means marginalised. 85% of residents and businesses can now get fibre broadband, and with new industries, a dynamic university and a fantastic natural environment, the area has all the ingredients for a flourishing economy.

“This Growth Deal will boost key industries such as the area’s world-leading marine renewable energy sector, will bring real improvements to rail, cycling and road networks, and provides the tools this beautiful region needs to forge ahead.”

Chris Pomfret, chairman of the Cornwall and Isles of Scilly Local Enterprise Partnership (LEP), added: “Signing our deal with the Minister is a real milestone, unlocking as it does millions of pounds of investment to grow the economy of Cornwall and the Isles of Scilly.

“Our deal is the first tranche of investment vital to delivering our Strategic Economic Plan; a plan that could see around £1 billion of public and private sector monies invested in our economy between now and 2020.”