The High Court today gave organisations and individuals involved in the development of solar photo-voltaic projects, the go-ahead to proceed with a Judicial Review on all grounds against the Secretary of State for Energy and Climate Change, Chris Huhne.

It follows an earlier announcement today that, as widely expected, the Government was making drastic cuts to the FIT scheme for large-scale commercial projects.

In its ruling to grant permission, the High Court also stated that the case should be heard at a substantive hearing before the end of the Court’s summer term, which ends on July 29.

Mark Shorrock, CEO of Low Carbon Solar UK, one of the firms involved in the appeal, said: “We believe that the Government’s decision to initiate this fast track review was flawed from the start.

“Once we received the High Court’s positive ruling we twice approached DECC to see if they would meet with us to find an acceptable solution out of court. Disappointingly they declined this offer and so we are reviewing the next steps in the legal claim.

“We support the Government’s objective for creating a sustainable basis for renewable energy in the UK for the long term. This is required to deliver the Government’s ambitious 2020 targets, which they are already behind in reaching. However, we strongly disagree with DECC’s announcement today for creating that sustainable basis by cutting the tariff rates for solar projects by more than 70% just one year after the FIT Scheme was introduced, with the explicit support of the Conservatives and Liberal Democrats.

“The announcement today confirms that over 500 responses were received to the consultation and the vast majority disagreed with the Government’s proposals. By the Government’s own admission, their proposal is likely to prevent any solar projects above 50kW being developed across the UK. This is not the appropriate way to lead the transition to a low carbon economy.” 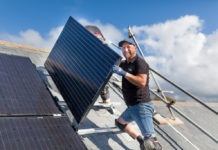