The MP for the West Cornwall and Isles of Scilly, Andrew George, will lead a Commons debate today in which he will seek the reassurance of the Transport Minister on plans for the future improvement to the Penzance to the Isles of Scilly ferry link.

Cornwall Council’s planning committee rejected the plans for the Penzance Harbour ferry terminal shortly before Christmas, putting the future of the project in jeopardy.

George had warned the project leaders that this might happen and is seeking Ministerial support to extend the funding deadline and to give time to explore workable alternatives.

The Parliamentary debate commences at 11am this morning (January 5). Sadiq Khan MP, Minister of State for Transport, will respond to Mr George’s opening remarks. 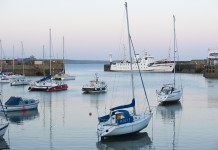