There are fresh concerns over staff cuts at Redruth’s Tax Office, after it emerged that HMRC are reviewing the role of the local tax offices as a front line service for people with tax enquiries.

The news comes less than a year after a successful campaign to prevent the loss of 50 jobs at the office.

Local MP Julia Goldsworthy has written to HM Revenue and Customs highlighting the importance of a face-to-face service, and calling on them to make their future intentions for the service clear.

Staff at Redruth Tax Office are concerned that the “review” may lead to the closure of the drop in centre altogether. Camborne’s JobCentre suffered a similar fate – a reduction in opening hours appeared to be the prelude to a permanent closure of the office

Goldsworthy said: “Our fear is that the Government does what it did to Camborne Jobcentre – reduces the hours it is open, causing a reduction in use of the facility, and then use this as an excuse to close it altogether.

“The Tax Office is an important local employer in Redruth as well as providing important, face-to-face services for people with tax enquiries.

“It is vital that the office remains open and fully utilised five days a week.”

HMRC said it was committed to providing a face to face service at is enquiry centres, but would not rule out shorter opening hours or “part week opening” of the local office. 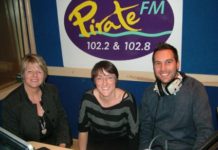