The company, a mineral exploration and development company focused on its projects in Cornwall, is now pressing ahead with its United Downs copper-tin exploration project near Redruth and the South Crofty tin project in Pool.

The funds have been raised primarily to advance exploration drilling at United Downs, in order to define a mineral resource. The company already has planning permission to build a processing plant at South Crofty.

Stephens Scown has acted for Cornish Metals since 2016 when a team led by consultant Sally Norcross-Webb assisted in the acquisition of South Crofty from administration. Since then, Norcross-Webb, with Simon Trahair-Davies, head of the mining and minerals legal at Stephens Scown, Chris Tofts, Tim Lane, and many others from the firm, have been closely involved with many aspects of the group’s progress including corporate, property, planning, and employment matters.

Commenting on the AIM listing and fundraise, Norcross-Webb said: “We are delighted to have helped the Cornish Metals group in this significant achievement – the United Downs project is very exciting and great news for Cornwall.”

Chief executive of Cornish Metals, Richard Williams, added: “We have worked closely with Stephens Scown from day one of our acquisition of the Cornwall projects. The team of Sally Norcross-Webb, Simon Trahair-Davies and Chris Tofts has played a key role in reaching this current milestone in the growth of Cornish Metals, and we look forward to continuing the relationship with Stephens Scown.” 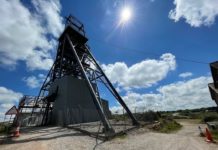