Leading microwave engineering company Flann Microwave is working with the Met Office to provide a key component for the UK weather radar network.

The network is a vital element in the Met Office’s weather forecasting and monitoring activities, with 15 stations making measurement from locations across the UK.

Flann was called in by the Met Office to help improved the reliability of the system, supplying new hardware and technical advice.

The work was part of a £10 million upgrade to the Met Office Radar Network completed last month and which for the first time means the size and shape of raindrops, snowflakes and wintry shower types can be captured together with wind speed data.

These new scientific advancements will ultimately lead to improvements in the accuracy of rainfall estimates, particularly during high impact weather events, such as flooding and wintry weather.

Chris Sloan, radar hardware manager at the Met Office, said: “We use Flann WG12 waveguide switches in our in-house designed weather radars after experiencing poor reliability from another supplier’s equipment.

“Our 15 weather radar are a vital part of the Met Office observing network, based in 15 remote locations across the UK. They run 24/7 detecting rainfall so reliability is important to us.

“Flann Microwave were able to supply a direct replacement switch including carrying out some accelerated lifetime tests to address our specific concerns over reliability. Being based in the south west, meant that we were easily able to have face to face meetings and discuss our requirement direct with their engineers.”

With a 60-strong team based in Bodmin, Flann has grown over six decades to secure a global reputation and market leading position in the design and manufacture of precision microwave communications equipment.

The company serves customers in the telecoms, government, automotive, aerospace, defence and research sectors, exporting more than 80% of production.

Chief executive, professor James Watts, said: “We are delighted to be supporting the Met Office, as another south west based organisation and also world leaders in their field, and to have been able to significantly improve performance in a key part of their monitoring infrastructure.” 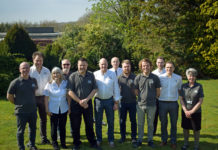