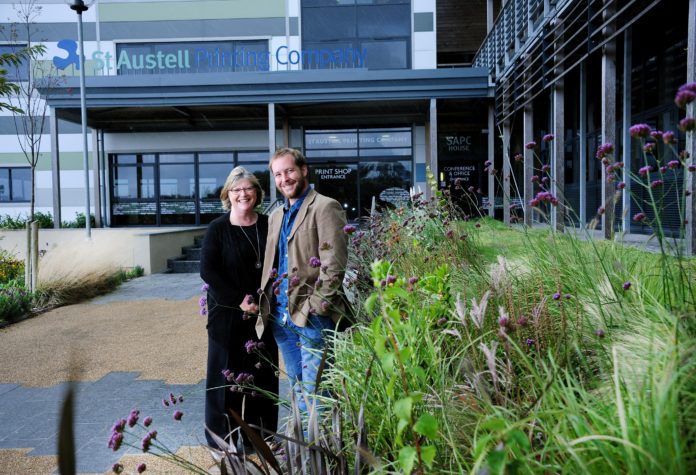 A St Austell business has sown 11 million poppy seeds to commemorate the centenary of the First World War.

Amanda Moody, director of St Austell Printing Company (SAPC), was inspired to plant the seeds after the company sponsored programme printing for The Lost Gardens of Heligan and Wildworks play – The Day Our World Changed.

The 11 million seeds, along with 300 plugs, have been planted in the wildlife garden at St Austell Business Park at Carclaze.

Amanda Moody said: “The play was very moving and inspired me to think about how we could use the space we have here to commemorate the First World War.

“The plants are already starting to grow and hopefully they will create a beautiful and poignant display over the next four years.

“When we were developing and building the business park, having beautiful landscaping and a wildlife garden where our staff and tenants could enjoy a break was really important to us.”

“The aim has always been to create a balance between a traditional ‘gardenesque’ appearance with that of the function of the commercial buildings.

“As a part of the scheme it has been important to allow a certain amount of natural regeneration.

“The adjacent landscape in and around the china clay area, and in particular Carclaze Pit is extremely interesting and species diverse. Working with this and not compromising this natural regeneration has been very important.”

Wildlife was also been a key part of the design of the garden and since the £6.2m development officially opened in September 2013, it has become home to dragonflies, newts, tadpoles, frogs, butterflies, birds and a Muntjac deer.