A St Austell-based company has seen staff numbers increase by nearly 100% in the last 18 months following relocation to new premises.

St Austell Printing Company (SAPC) has grown from 27 to 50 employees since moving to its new £6.2 million St Austell Business Park home in March 2013.

MD, Peter Moody, the man behind developing the business park, said: “When we moved from the centre of St Austell to our state of the art, environmentally friendly building, we set ambitious growth targets.

“Almost doubling our team shows that we were right to make the move.

“We’ve got a dedicated team in place who have all worked incredibly hard to make the move a success.

“I’m still ambitious for further growth that will benefit us and the wider St Austell community.”

Part of SAPC’s growth has been as a result of acquiring St Austell Mailing, a direct mail distribution and fulfillment company.

Nick Keat, St Austell Mailing’s manager, said: “We’ve worked alongside Peter and St Austell Printing Company for a number of years, so it made sense to come under its umbrella.

“It will allow us to continue to work closely together, use the state of the art facilities and grow this part of the business even more.

“It means that our customers benefit by having everything under one roof, as well as our care and attention to detail.”

Over the years, St Austell Mailing has packed and distributed a range of marketing material including flyers, letters and special offers, as well as printing 80,000 envelopes for luxury retailer Harrods and posting Love Heart sweets for a local theatre company.

St Austell Business Park also let out 50% of its 22 business units and welcomed over 4,000 delegates its conference facilities. 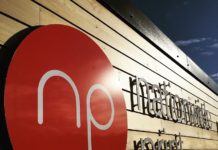