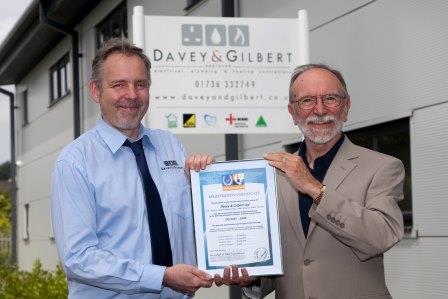 A West Cornwall business that sparked into life 18 years ago and has since grown to become one of the county’s leading approved electrical contractors has just achieved its latest accolade – in double quick time.

Crowlas-based Davey & Gilbert which specialises in the design, installation, testing, commission and maintenance of electrical, plumbing and heating and renewable solar & heat pump installations has achieved its ISO 9001 certification to further support its growth and development.

Launched in 1996 by Mark Davey and Julian Gilbert, the company has grown positively, employing a team of more than 25 from its purpose built offices and stores to work on a wide range of projects from St Michael’s Mount to new build developments and refurbishments through to commercial projects in hotels, restaurants, schools, colleges and retail outlets across Cornwall.

Company Director Julian Gilbert said the decision to go for ISO certification was largely driven by the fact it was developing a growing reputation across the county for the quality of its work and securing more prestigious contracts, which in turn was still further raising the company’s reputation requiring the need for recognised industry and business standards.

Gilbert said: “Our industry is built on standards given the often complex nature of the work we do, but we wanted to raise the bar even further given the increasing number of contracts we are being invited to look at and those we are winning and working on. The ISO certification was something we felt would further demonstrate to our customers the high standards and consistent levels of service we offer and deliver.

“As we grow and complete increasingly diverse projects across the public and private sector, it is likely that additional standards such as ISO9001 will be required as a quality standard so for us it was important to demonstrate that now. Achieving it was a really positive thing for us – a lot of the processes that were required we already had in place, but to have our systems and ways of working brought in line with the ISO approach has been beneficial, especially with us tapping into new areas of the electrical industry such as power generation through solar energy installation on domestic and commercial properties, which we are now offering.

“We were also told that we had achieved the ISO in the quickest time recorded in Cornwall, so we must have been doing something right in the first place.”