A Cornish firm of chartered building surveyors is looking forward to further expansion after promoting two members of its team.

RTP Surveyors, which has offices in Falmouth and Bodmin, has promoted associate directors, Martyn Middlewick and Richard Collett, to equity directors.

The appointments have been made to recognise the impact that the chartered building surveyors have had on helping to drive the business forward.

Company founder and director, Richard Thomas, said: “Martyn and Richard have had a huge impact on the company since they both joined.

“We’re delighted that they have both become equity directors. Between them they have over 30 years experience in the construction industry for both the public and private sector and as such, they have invaluable knowledge and experience.”

Middlewick joined the company in 2002 and specialises in areas including expert witness, party wall, building surveys, asbestos surveys and schedules of dilapidations. 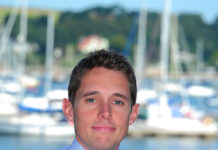