The battle lines are being drawn in Mullion over the proposed expansion of a holiday lettings company.

However, local objectors to the scheme managed to put a halt on the building work after it was discovered that there was a right of way under the old barn that the new building was replacing.

Owners Martin and Pauline Raftery applied to divert the footpath, but at its January meeting Mullion Parish Council voted against.

Now local residents in favour of the expansion have formed a support group – Friends of Mullion Meadows – to raise awareness of the positive impact and support that Mullion Meadows Craft Centre brings to the village; in addition to highlighting the benefits to the local economy.

A representative from ‘Friends of Mullion Meadows’ said: “We find it a shame that Mullion Meadows cannot continue with their new building due to a public footpath issue.

“To see the partly constructed building left flapping in the wind not only spoils the look of the Meadows, but is holding back the expansion of Cornish Cottages and a new fledging business ready to move into the old office. Additional jobs have been lost because of this delay which cannot be acceptable in these difficult financial times. There are eight small businesses at the Meadows giving employment to over 30 people. For a village the size of Mullion we should all be very pleased and proud of the centre and support it in whatever way we can.”

Martin Raftery added: “If a solution cannot be found to this footpath issue and we are unable to finish the new office, we will have to look at moving ‘The Meadows’ to a new location away from Mullion.”

The next Parish Council meeting is on Tuesday, March 15 at 6-45pm in the Methodist Hall.

Going from coast to coast 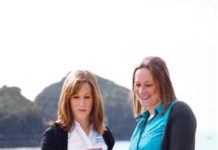