A small Scorrier-based bakery has struck a blow for Cornish craftsmanship by taking on the ‘big boys’ and bucking the trend towards large-scale distribution of factory-made products to limited outlets.

The company believes it has notched up a first as the only Cornish producer and distributor of Cornish sliced loaves to retail customers big and small, right across the county.

All are hand-made by time-served craft bakers, and the firm is anticipating recruiting more bakers to cope with demand if the early response is maintained.

“We are doing something genuinely very different and beneficial on a number of fronts, supporting Cornish jobs, increasing customer choice locally and definitely competing with the ‘big boys’ in the process!” said Prima managing director Mark Norton.

He explained: “The major Cornish chains primarily sell their sliced bread only through their own outlets and don’t offer a wholesale service other than to large accounts.

“The branded sliced loaves sold in supermarkets are made outside the county in large automated factories and then shipped by lorry. This is environmentally poor, due to the food miles involved, and also involves a machine-made loaf, not a tasty, ‘andsome Cornish loaf made in Scorrier!”

He added: “The sliced bread market is currently dominated by four huge national businesses. Customer demand has prompted us to do much more in the bread area and to offer a genuine Cornish alternative to the national brands.

“What we are now effectively doing is pitching Cornish skilled jobs against out-of-county machine-minding positions – craft bakery products versus automation in huge factories in places as far away as Bristol and Cardiff.” 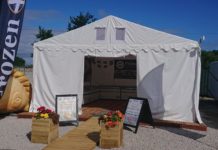