Cornwall’s longest-established film and television company, Three S Films, is extending its business beyond the Tamar having recently completed a promotional film for the University of Exeter.

The seven-minute piece is part of an international campaign to showcase the university as a premier destination to study and teach.

The film has been highly praised and is proving to be very popular on YouTube with almost 6,000 hits since posting in late January.

Penzance-based Three S Films, which has been established for 30 years, provided a full ‘Script to Screen’ service.

Director Mitch Adams said: “This was a really exciting but equally challenging project. There is so much to promote about the University of Exeter as it ranks in the top 1% of universities internationally.

“I am delighted with the result; it really does justice to the grandeur of the Victorian campus alongside the sleek, brilliantly equipped 21st century £400 million expansion.”

Dr Shaun Curtis, director of International Exeter added: “Three S Films did a tremendous job for us, understanding and responding to our requirement for an extremely high quality film. They managed the whole process and were very professional. We are delighted with the end result which adds a unique approach to our international marketing campaign.” 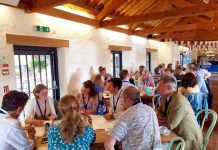