A Hayle-based photography company is exporting its concept to the USA.

For every morning since June 2005, The Day That photographers have been taking pictures of the dawn rising over the coastline of west Cornwall.

The photographs are then mounted, framed and hand inscribed with a personal message, making them a commemorative gift for births, weddings, birthdays etc.

And now the company has opened an office in the US. Marketing director Kerensa Beer-Robson explained: “We have increasingly been receiving orders and interest from different parts of the world, from people who have found us on the internet, so we realised that there was potential to grow into foreign territories. America seemed the natural place to begin.”

There is now a US team of three photographers on board and a production facility has been set up in Virginia.

A US website has also been set up, with the help of fellow Hayle company Nixon Design, and launches on January 25.

The US photographers began taking photographs on January 1 this year. However the library of Cornish images will also be available to US customers.

Photographs in the USA are being taken around the Chesapeake Bay, an area chosen not only for its natural beauty but also its significance in the history of the birth of the American nation. 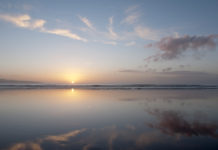