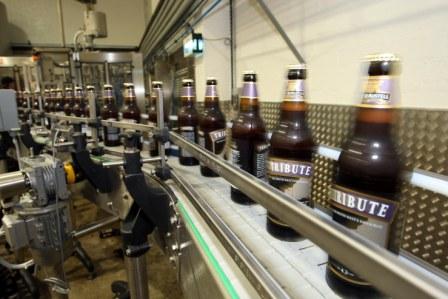 One of the most significant milestones in the 158-year history of St Austell Brewery was celebrated yesterday when the Brewery’s new £750k in-house bottling line was officially opened.

Piers Thompson, honorary president of St Austell Brewery, was watched by more than 100 guests as he pressed the switch to send bottles of ale rolling off the high-tech new facility.

The bottling line represents a major investment by Cornwall’s biggest brewer and has been driven by soaring demand for its award-winning ales both regionally and nationally. It comes in the same year as the Brewery was awarded the prestigious title of Regional Brewer of the Year in The Publican Awards.

It also means that St Austell’s famous beers are now bottled as well as brewed in Cornwall.

The new bottling plant will allow the brewery to meet existing and future demand regionally and nationally for its bottled ales. The line will have initial capacity to bottle up to 100,000 bottles a week and as well as its flagship Tribute Ale it will also package the Brewery’s range of award-winning bottled beers including Admiral’s Ale, Proper Job IPA, HSD and Clouded Yellow.

Longer term it is hoped the new bottling line will provide a valuable facility to other south west drinks producers who currently have their produce bottled out of county.

The project has been supported by an £180k investment by the South West Regional Development Agency through its Grant for Business Investment (GBI) programme and has helped secure 29 jobs, created five new jobs and brings significant environmental benefits to the Brewery’s operations.