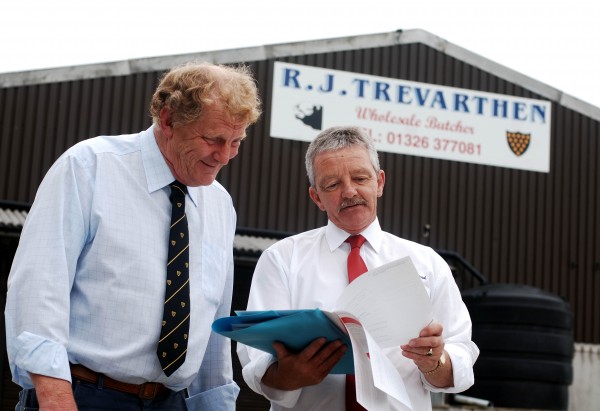 One of Cornwall’s leading wholesale butchers says he’s seen a significant increase in business and the creation of new jobs since the opening of a new abattoir supported by South West insurer Cornish Mutual.

RJ Trevarthen has operated a butchery and slaughter service for years at a farm and facilities near Stithians, and 12 months ago they opened a new abattoir at Roskrow, near Penryn. Now the company employs over 50 members of staff and has expanded distribution further into Devon and Somerset.

Owner Robert Trevarthen says they are growing in these areas because they can deliver more on the same day. “We’ve certainly been busier now we’ve got one of the most modern abattoirs in Cornwall,” he commented. “Our turnover is growing and it’s been a real success. It’s helped us to streamline the operation from working out of two sites to one.”

He added: “It’s a lot more efficient working in purpose-built premises and has helped the company to grow, saving time and giving us the ability to take on more staff.”

Trevarthen says all the meat is from local farmers and has full Cornish traceability. “This is something a lot of our customers are asking for,” he said, “by buying their meat locally, they’re supporting local farmers as is Cornish Mutual.”

Cornish Mutual provides RJ Trevarthen with insurance cover for its 24 vehicle fleet, goods in transit, home and farm, livestock, premises, employers’ and public liability. The independent butcher has not only been insured by the company for over 34 years but has known local insurance Inspector Jeff Kincaid since they were at school together.

Kincaid, who covers a wide area of Cornwall including Redruth, Stithians, Mount Hawke and Helston, said: “Its great seeing a local business and one of my Members doing so well. Robert and I go back years and we’ve grown up together. I’d like to think that because of our history, I can just pop in and see Robert anytime, give him honest and impartial advice and I know he appreciates the service we give him.”