The Greenbank Hotel in Falmouth has withdrawn its planning application for a £14 million improvement and expansion scheme.

In an announcement that will doubtless come as a blow to local businesses and those seeking work in the area, the hotel’s owners blamed “a combination of reasons” for the decision.

“It’s a real shame for Falmouth, especially in the current climate. Enhancing the Greenbank would create many dozens of jobs, and represent a major new investment project for the area.  As a group of local businessmen, we have so far tried to keep as much of this work as possible with local companies.

“In addition, the UK’s foremost hotel experts, TRI, had indicated the town badly needs this kind of accommodation, and that these improvements would bring an ongoing, multi-million pound boost to the local economy.

“It’s hugely disappointing, because this is something Falmouth can ill afford to lose.”

Pascoe also took the opportunity to underline the directors’ continued commitment to the hotel’s future prosperity. 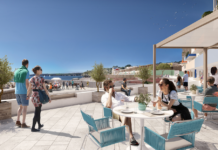