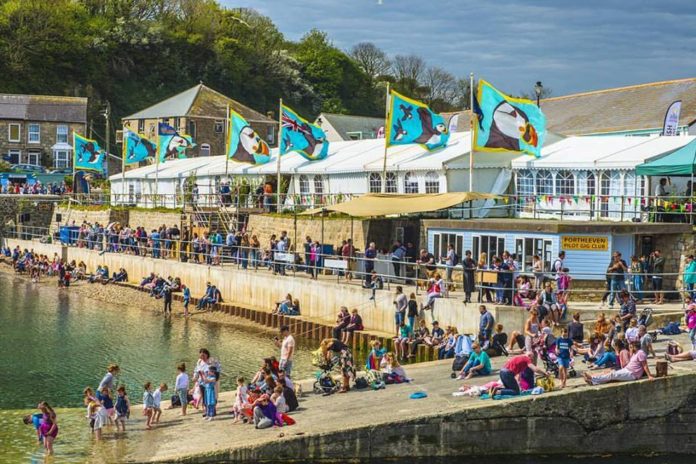 Details of this year’s Porthleven Food Festival have been announced.

The popular event is set to return after a two-year break due to Covid, over the weekend of April 22-24.

The Chef’s Theatre will again sit at the heart of the event, in the tent on the Harbour Head, while there are also plans for a new food space – The Diner’s Club, offering a place to sit and enjoy taster pots from street food stalls, alongside acoustic music performances and talks.

Food Festival chairman, Alec Short, said: “This is something we’ve been trying to get right for a long time. The idea is that the stalls in The Diner’s Club area provide smaller pots of food at a lower price so that instead of eating one dish at lunch you can sample more – it’s the essence of what a food festival should be.”

And this year the food market will be run by the team behind the Food & Farming tent at the Royal Cornwall Show – showcasing quality, artisan suppliers from across Cornwall and the south west.

There will be a number of fringe events over the weekend, from exhibitions in the art galleries to bands in the pubs.

One significant change this year is that festival will not be selling tickets, but instead asking people to make a donation towards the running of the event.

Short added: “There will be no tickets this year – we want to keep the festival free for anyone who can’t afford it.  But it costs £150k to run the festival in its current format – that’s for all the infrastructure, staffing and events. And we have a gap in funding.

“So, we’re asking that if you enjoy the festival this year, or have enjoyed it in the past, that you help to secure its future by making a donation. We’re a not-for-profit event – so any profits over and above what we need to run the festival will be donated to Porthleven events and organisations.”

There will be collectors at the event. Alternatively, you can make a donation through Just Giving by clicking here.