Cornwall came alive with a world of music this Bank Holiday weekend as 2,000 singers of all ages and nationalities brought their own songs and cultures to entertain around 45,000 people in the 2017 International Male Choral Festival.

The world’s largest male choral event welcomed 60 choirs for 50 concerts, competitions and celebrations in 40 venues across the county from Bude to Land’s End, Porthleven to Saltash and everywhere in between.

Singers from 9 to 90 years old performed in churches and gardens, theatres, castles and major tourist attractions – with organisers estimating that the influx of choirs, their entourages and festival visitors have brought more than £1 million into the local economy.

Among the global visitors for this eighth biennial Festival were choirs from Australia and America, Russia and across Europe as well as Wales, Scotland, England and Cornwall itself.

“It’s been such a pleasure to bring singers from all over the globe together for such a good humoured and harmonious event,” said festival director, Rob Elliott. “This festival just goes from strength to strength and the more people who know about it the better it gets.” 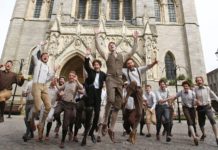 Biggest event of its kind in the world