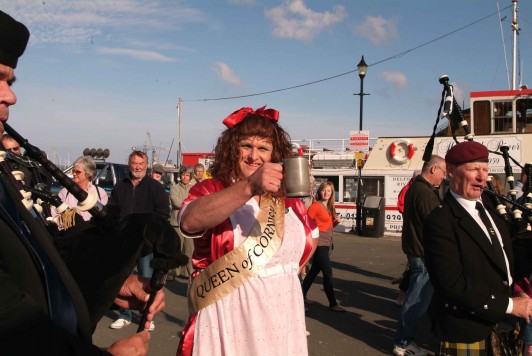 Organisers are hailing the opening weekend of the Fal River Festival a success as around 8,000 people enjoyed the activities on offer.

Despite the mixed Bank Holiday weekend weather the crowds flocked to events, which included the first ever Fal Fish Festival, sponsored by the Greenbank Hotel and Stein’s Fish & Chips.

The nine-day festival, which celebrates life on and around the River Fal, runs until Sunday, June 6 and features over 150 events covering music, theatre, art, food, drink, sport and water.

Festival director, Toby Budd, said: “The opening weekend was absolutely amazing and there was a huge buzz around Events Square in Falmouth, especially with the Fal Fish Festival.

“We had some great chefs giving some really good demonstrations.

“I think for me the great thing was to see so many people enjoying themselves and smiling.”

The festival was officially opened in the Lander Gallery in Truro by Lady Mary Halborow before guests including local icon – Betty Stogs, boarded the St Mawes Ferry, The Duchess of Cornwall, for the Beer Fleet voyage to Falmouth.

Festival chairman, Tim Light, said: “The Beer Fleet is an amazing way to start the festival.

“We carry a ceremonial kegs of Skinners ale from Truro to Falmouth to mark the start of the festival. We were also privileged that Betty herself found a window in her diary to come on board and help get the party going.”

Plastic-free 2020 at The Greenbank