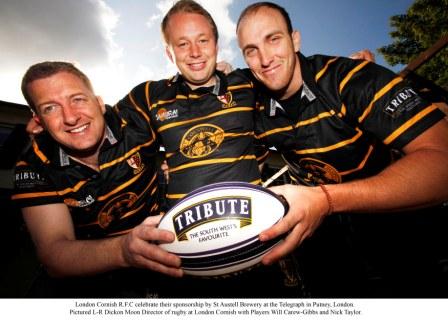 Tribute Ale – the Official Beer of South West Rugby – is extending its support for the game beyond the region after signing a shirt sponsorship deal with London Cornish RFC. The flagship ale of Cornwall’s biggest brewer St Austell Brewery, Tribute is already title sponsor for grass roots rugby across the south west through the Tribute Leagues and also has shirt sponsorship deals with a number of clubs in Cornwall and Devon.

The deal with London Cornish demonstrates the brewery’s support for rugby and recognises the huge increase in national sales of Tribute, with London becoming an increasingly important and growing market for the ale.

Players and staff from the club joined representatives from St Austell Brewery at London Cornish’s local pub, The Telegraph in Putney Heath, to celebrate the sponsorship deal which will see the first team taking to the field this season wearing smart new Tribute Ale branded shirts.

London Cornish RFC is one of the fastest rising amateur clubs in London, currently playing in London 2 South-West. There are four adult sides playing in leagues every week and the club, based just outside Putney, frequently welcomes more than 50 players to their once a week training sessions.

Director of Rugby at London Cornish RFC, Dickon Moon, said: ” We are delighted to welcome St Austell Brewery to our family of sponsors. They fit the profile of the type of sponsors we are keen to attract very neatly, a progressive Cornish company with a developing presence in London. Tribute Ale is the beer of choice of our players and supporters alike and we look forward to a long and fruitful partnership between the two organisations.”

Jeremy Mitchell, head of marketing at St Austell Brewery, said: “We’re delighted to extend our commitment of rugby out of county with a team whose roots are very much Cornish. Tribute Ale has enjoyed tremendous growth over the last 12 months and this latest deal is another example of supporting Tribute Ale’s national aspirations.”

As well as the successful sponsorship deals, Tribute Ale has enjoyed an equally successful year. Sales of the ale have risen for eight consecutive years since its launch in 2001, and by an amazing 26% in the past 12 months, continuing the meteoric success of the beer which has become the first and only Cornish beer to make it into the UK Top 10 of premium cask ales