A partnership of three Cornish companies has secured funding of £148k to develop state-of-the-art technology to enable faster and more accurate communication with satellites.

Flann Microwave, Teddington Systems and Goonhilly Earth Station Ltd will be working together to create miniaturised components for the next generation of tiny communications satellites, known as nanosatellites and CubeSats. Bristol-based Thales Alenia Space will support the project with advice on end-user acceptance aspects and environmental aspects.

The project is expected to create 14 new jobs and is a further boost to Cornwall’s ambitions to develop space sector manufacturing, servicing and launch capabilities. Awarded by the West of England Aerospace Forum (WEAF), the R&D grant is funded by the European Regional Development Fund (ERDF) and delivered by AeroSpace Cornwall.

Huge demand from individuals and business for more high-speed data services is driving a revolution in satellite technology. Traditional large satellites weighing several tonnes and orbiting 22,236 miles above the equator are set to make way for nanosatellites and CubeSats deployed in constellations just 300 miles above the Earth’s surface.

But maximising the greater data capacity, or bandwidth, offered by these systems requires much higher frequency microwave switches to transmit data to ground antennas. These ‘W-band’ switches don’t currently exist – and this is where the new partnership comes into play.

With its precision manufacturing skills and experience in space flight hardware, including for NASA’s Jet Propulsion Laboratory, Flann Microwave is well placed to lead the project.

Completing the partnership, Goonhilly will offer advice around control specifications, Teddington will design and manufacture the electrical components, and Thales Alenia Space will provide end-user and environmental consultancy.

Professor James Watts, CEO of Flann Microwave, explained: “Nanosatellites and CubeSats as small as 10cm cubed and weighing as little as 1.4kg are small enough to be launched as additional payloads on a large mission, in clusters of up to 100 at a time on a single rocket or by the new class of vertical and horizontal space launch systems being developed in Scotland and Cornwall. This makes them very cost effective and more than 350 of these satellites have been launched so far this year.”

“Flann has been designing and producing precision components since 1956 and we first designed and manufactured a W-band switch in 1980 for ground use. Of course, to go into space, the new switch will need to be much smaller and lighter.

“With all of the funded partners being based in Cornwall there are huge advantages for the Cornish economy. It puts us at the forefront of a growing sector with the initial expectation that it will create 14 new jobs and the potential for further growth, including for the many suppliers already working with the partners.”

Teddington MD, James Henderson, added: “It is good news all round: for us and our partners but it’s the public that are the ultimate winners in the shape of greater data capacity and bandwidth. It’s an exciting project for Teddington systems and a real thrill to know our miniaturised components will eventually blast into space.” 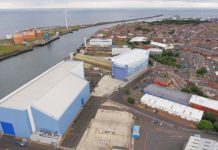