Cornwall Council has agreed to allocate £1 million over the next five years to help bring superfast broadband to the Duchy.

The Council’s Cabinet member for the economy, Carolyn Rule, said the Next Generation Broadband project would transform the economic performance of Cornwall and make it one of Europe’s best connected regions.

She explained: “This will be the single largest and most transformational Convergence project which could generate £250 million for Cornwall and the Isles of Scilly’s economies over the next 15 years.

The costs of developing and managing the project are said to be approximately £4.5 million, with the balance being provided through Convergence funding.

If successful, the Council says the project will result in around 10,000 businesses using the new infrastructure and a further 6,000 businesses benefiting from improved performance. It will also create 4,000 new jobs and safeguard a further 2,000 existing jobs.

Members of the Council’s Cabinet agreed unanimously to allocate £1 million over the next five years from the Council’s Corporate Match Funds budget to ensure the delivery of the Next Generation Broadband project.

The Council added that the project requires significant European match-funding and needs to secure the necessary approvals from Brussels before signing any contract with a private sector partner. It is not expected to announce the preferred bidder until early summer. 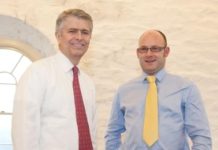