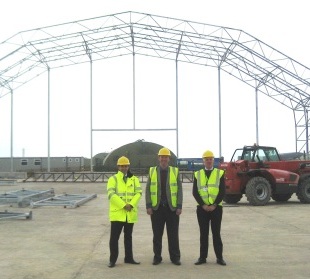 Apple Aviation Group (AAG), a UK-based aircraft maintenance, repair and overhaul (MRO) company, has laid the foundations of its new hangar at the Aerohub Enterprise Zone, the location of its base maintenance facility headquarters.

The new facilities at the Enterprise Zone at Newquay Airport, will provide a large, bespoke space for AAG’s increased operations.

Commercial director of Apple Aviation, Bernard Longman, said: “Aerohub at Newquay Cornwall Airport has been selected as the site for our new MRO facility, due to the excellent infrastructure the airport has to offer plus the benefits of developing our new business venture within the Enterprise Zone.

“The MRO facility will include aircraft storage and recycling areas and AAG looks forward to building relationships with the local community and businesses, in addition to contributing to the economy in the south west.”

Newquay Cornwall Airport MD, Al Titterington, added: “Their presence is a positive addition to the current Aerohub portfolio and we believe their services will assist in attracting other aviation businesses to the airport’s Enterprise Zone. Apple Aviation will bring exciting employment opportunities for skilled workers and will also provide extra revenue to businesses within the local economy.”

AAG has already recruited five new employees, three of which are from Cornwall. It hopes to double the number of new recruits by the end of the year, and if it should win a large contract, aims to have as many as 22 employees by the end of 2014.

AAG currently has an Embraer aircraft at Aerohub under a long term contract for maintenance and storage. Soon they will see the arrival of both Airbus and Boeing aircrafts and hope to perform their first teardown at the airport in April, which will be a wide body aircraft.