A Helston-based staircase manufacturer has won a clutch of new contracts worth £2 million.

Spiral Construction, which claims to be the UK’s largest spiral staircase manufacturer, has secured work on a number of Ministry of Defence (MoD) schemes across the country, as well as an agreement to supply three feature staircases for the City University in Newport.

The largest contract for £1 million is for a further phase of the £8 billion Allenby/Connaught project for Aspire Defence Ltd, the largest ongoing construction project in the UK.

Spiral is to provide over a hundred fire escape staircases for MoD bases on Salisbury Plain and around Aldershot. It has been working on the project since 2006 and as a result of its performance to date, was able to negotiate the contract without competition. The company has also secured works on other MoD projects throughout the UK for a further £750k.

Spiral Construction’s MD Eric Nicholls commented: “We are absolutely delighted to have work on these contracts which secures work well into 2010, and some up to 2012.

As a result of good work on past contracts we are now firmly established as the main supplier of this type of staircases on all Ministry of Defence sites around the UK. The construction industry is the most difficult we have experienced in over 20 years so this work is a credit to our skilled staff and all the efforts we are making.”

The company, which employs 50 people at its Helston base and throughout the country, has continued to invest in new machinery and technology, recently purchasing a new rolling machine and extending its yard and outside storage areas. It has recently appointed Danny Chambers as Sales and Marketing Manager, a new position in the company.

The company is also currently installing four feature stainless steel and walnut staircases for new houses in central London which are on the market at £12 million each, despite the recession, and has just completed a large helical staircases for one of Scotland’s leading schools near Perth. 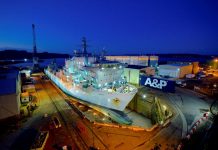