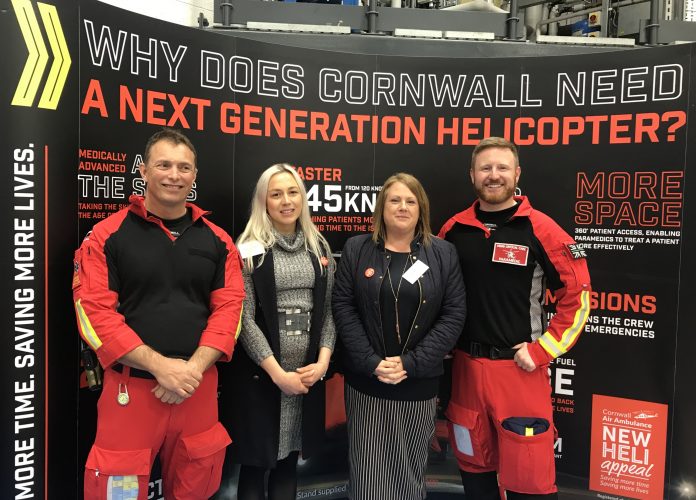 Earlier this year marketing and creative agency Wolf Rock named Cornwall Air Ambulance its charity of the year for 2018. Since then, the Truro agency has worked closely with the charity, to develop the creative concept for its latest fundraising campaign.

Developed by the creative team at Wolf Rock, the New Heli Appeal will be feature across Cornwall Air Ambulance’s fundraising campaign, which has a target of raising £2.5 million over the next two years.

Cornwall Air Ambulance is a vital service for Cornwall, flying more than 700 lifesaving missions each year and is run entirely on donations from the public. As Wolf Rock’s 2018 charity, the cost of promoting this work is greatly reduced, meaning that more of its funds can be spent keeping Cornwall’s pre-hospital critical care team in the air.

Jo Downie, director at Wolf Rock said: “We are proud to see this new brand campaign launched. We love working with the Cornwall Air Ambulance team and are looking forward to helping them with marketing services for this very important appeal over the next two years.”

James Oxley, communications and marketing manager at Cornwall Air Ambulance, added: “The collective creative talent at Wolf Rock has been instrumental in the successful launch of the New Heli Appeal.

“Its team of skilled and experienced marketing experts helped us create a dynamic new brand that is inspiring both new and old supporters to join the mission to bring a next generation air ambulance to Cornwall. It was a tough brief and they nailed it.

“The fact Wolf Rock is doing this work pro-bono by naming Cornwall Air Ambulance as it’s charity of the year, underlines the passion the agency has, not only for the outstanding work is does, but also for Cornwall’s communities. I deeply-value the relationship we have built and can’t wait to discover what they have up their sleeve next for us.”