Made possible by high level business sponsorship and community support, this year’s ROC 5K has raised at least £17,000 for Robert Owen Communities (ROC), a charity which supports vulnerable local people with learning disabilities. Over three years, the event has now raised more than £38,000 for ROC.

ROC’s Calvin Lovelock said: “I’m really grateful for the generous support of the community and especially the business sector. The event has become the major source of funding for ROC Welcome, the charity’s vibrant social club and given ROC much greater prominence, including a platform for ongoing sustainability and development.”

Many runners enter as teams from business, rather than as individuals, and this distinguishes the event from the majority of other similar events held in Cornwall.

Scott Bentley, partner from major sponsor PKF Francis Clark, said: “We are very proud to be involved in this event having supported the ROC 5K since the beginning.  With over 30 staff taking part this year it is testament to the fact that they enjoy their fund raising efforts which are vital to good causes and reflect the importance the firm attaches to engaging with the communities where we live and work. I have thoroughly enjoyed the event this year and am already looking forward to next year.”

Having reached the event limit for the present route, ROC is hoping to be able to re-route the event for 2017. This could mean no entry limits and no barriers to participation for disabled people, within the context of a corporate team based event, and one of the largest events of its type in the West Country. 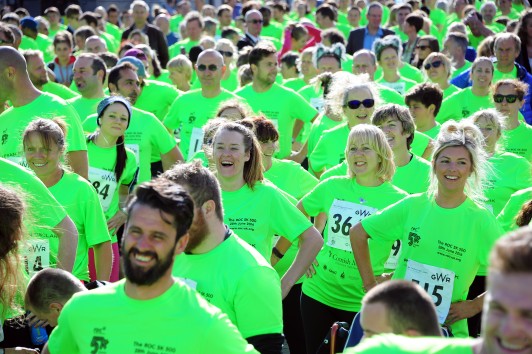