The event was opened by Tribute the puppy from Canine Partners, a charity which trains dogs to assist people with disabilities, helping them with day to day activities.

The tournament was won by the team from Coca Cola, with MJ Baker Foodservice second and Trevose Golf Club third.

Thatchers, Magners, Heineken and Carlsberg were some of the hole sponsors, with team representatives from the likes of Heavitree Brewery, Heineken, Carlsberg, Barclays, RBS, Stephens & Scown, and Ocean BMW.

In the evening participants enjoyed a sportsman’s dinner with raffle and a silent auction which included prizes such as a Jaguar driving experience and a weekend at Warwick Castle.

Ian Blunt, finance director at St Austell Brewery, said: “The amazing weather allowed us to put on an enormously successful day at Trevose Golf Club. The generosity of those taking part was phenomenal as was the support from all of our sponsors and we thank Trevose Golf Club for the breath-taking backdrops and for making us so welcome.”

“Tribute the puppy was impeccably behaved when he made his appearance before tee-off and he set the tone for the rest of the day.”

The St Austell Brewery Charitable Trust has raised over £500k since it was started in 2003, with donations going to a number of charities including Children’s Hospice South West, local good causes and individuals in the community who need help. 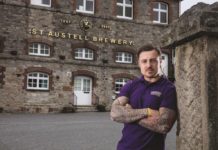