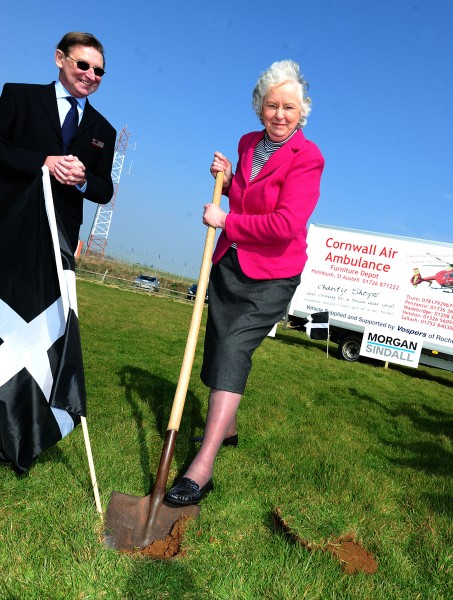 Work has officially begun on a new home for the Cornwall Air Ambulance (CAAT).

Lord Lieutenant for Cornwall Lady Mary Holborow was guest of honor and asked to cut the first piece of turf on the site at Trevithick Downs near Newquay Cornwall Airport on Monday (March 28).

Lady Mary was joined by charity trustees, some of the fundraising team and volunteers, as well as members of the construction project team. Officers from Cornwall Development Council and Carleen Keleman, director of Convergence, also attended to witness the official commencement of works.

Earlier this month, it was announced that CAAT was awarded almost £1 million of ERDF Convergence match-funded investment towards the development.

During the ceremony, the Trust confirmed that Plymouth-based firm Morgan Sindall has been appointed as principal contractor to build the new helicopter hangar and office base. Morgan Sindall has pledged to direct 65% of its subcontracted services to Cornish businesses to ensure the investment is injected back into supporting the Cornish economy.

The Cornwall Development Company and UK Trade and Investment are seeking professional services companies to make up a preferred suppliers list for investor services. If you have demonstrated experience dealing with international clients, please contact Kathryn Lister on 01872 322951 or email: kathryn@investincornwall.com for further details.