The message of drinking responsibly over Christmas is being endorsed by Cornwall Air Ambulance Trust (CAAT) as it launches a charity beer for the first time.

The organisation is working together with St Agnes-based microbrewery, Driftwood Spars, to create its own unique batch of beer.

Proceeds from the brew will be used to support the vital service offered by CAAT.

Marketing manager, Dania Shaw, said: “The team at Driftwood Spars is such a staunch supporter of the Air Ambulance that everyone involved was excited about creating this beer.

“We are aiming for a reddish/amber, hoppy beer, which is low strength, just 4%, to appeal to a wide range of people. We also want to encourage people to drink sensibly and responsibly.”

Driftwood Spars will produce a brew that yields 22 casks, of which 14 casks will be sold at the pub.

And CAAT has launched a competition for people to come up with a name for the beer. The closing date isNovember 27 and all entries should be sent to competition@cornwallairambulancetrust.org.

A case of 12 beers will be given as a prize to the winning entry and there will also be a chance to visit the helicopter and the paramedics.

The beer will combine popular recipes already brewed at the Driftwood including Blue Hills, Bad Lands and will be the colour of Alfie’s Revenge. 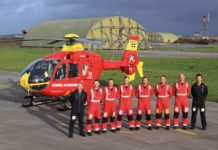