A grant from one of the region’s most prominent health-related charities to the James Parkinson Centre Cornwall (JPC) is set to help improve the lives of people living with Parkinson’s in the Duchy.

The Duchy Health Charity has given a grant of £15k to JPC to enable the employment of a Hub coordinator for its meetings around Cornwall.

Chairman of the board of trustees of the James Parkinson Centre, Sue Thomas, said: “This is a fantastic boost for JPC. The Hubs have become so popular we could not have maintained their growth without paid staff. There are around 1,500 people in Cornwall with Parkinson’s disease who need support. So far we have relied on volunteers from Rotary Club and Inner Wheel members across Cornwall but in order to expand we needed paid support.”

Sally Jane Coode, the DHC’s Chair of Grants added: “The Duchy Health Charity is delighted to help the James Parkinson Centre expand its operations in Cornwall, and hopes that it will mean many more people in the county with Parkinson’s Disease will benefit from this trailblazing initiative.” 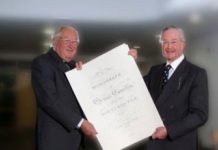