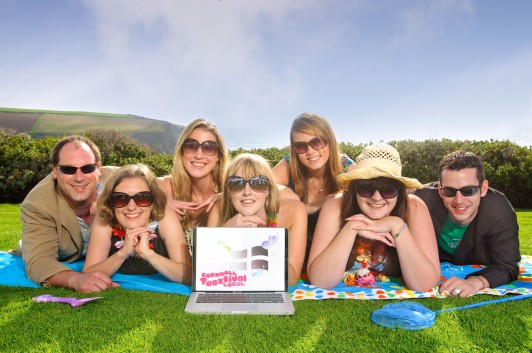 Cornwall will join cities from across the world next month and host its very own Twestival Local event.

Cornwall Twestival Local, which is one of only 14 events planned in the country, will be held at the Bedruthan Steps Hotel, a spectacular cliff top location near Newquay. The event will take place on Saturday September 12 from 7.30 pm and will raise valuable funds for a nominated charity.

A series of Twestival Local events are being held at locations across the globe between September 10 and 13. The Twestival concept, which started on the micro-blogging platform, Twitter, aims to connect people offline at the same time as raising money for worthy causes.

Naturally with a venue so closely associated with the sea, the event’s theme will be ‘Beach Chic’ – smart evening wear with a beach inspired twist.

The event will include live music, a DJ and a charity auction which will feature top prizes donated by local businesses. Prizes already donated include a two-night stay at the Scarlet Hotel, Cornwall’s luxury eco hotel, two return flights to any of Air Southwest’s nine, year round destinations from Newquay Cornwall Airport and a complete hair and beauty package at Mamouchi & The Great Escape in Truro.

The first 25 tickets, which are on sale now via http://www.amiando.com/twestivalcor.html will be priced at an early bird rate of just £15 per person, after these tickets have sold out all remaining tickets are available for £20 per person. All of the money raised through ticket sales and at the event itself will be donated to the nominated charity.

The Cornwall Twestival Local event is being organised by volunteers from across the Cornish business community. One of the organisers, Aren Grimshaw, Marketing Director at Tonick Media, said: “We’ve had to make the event happen in a small space of time but we’re really excited about the concept and we hope to bring together a wide range of people from across the county and beyond. We’re lucky enough to have the Bedruthan Steps Hotel hosting the event, with such a stunning location overlooking the North Cornwall coast the event is sure to be extremely popular.

“In February, Cornwall hosted a Twestival event and guests helped raise money for a global charity. This time around we’re upping the ante with the style of event and really hope it attracts even more people and we raise valuable funds for a charity closer to home.  Make sure you don’t miss out, book your ticket now.”

Guests attending the event will also be eligible for discounted room rates at the Bedruthan Steps Hotel.  Double and twin rooms are available for £55 pppn bed and breakfast from 11-13 September 2009.

Business interested in sponsoring the event or wanting to donate a prize to the auction should contact either Laura McKay or Shelley Fletcher at Deborah Clark Associates on 01208 77900.

For more information, or to buy a ticket, please visit: http://cornwall.twestival.com/ To keep up to date make sure you follow Cornwall Twestival on Twitter on @TwestivalCor.