A Cornish housebuilder says that recent sales activity at its Trinity Watch site in St Ives is a sign that the housing market in Cornwall is starting to pick up.

In the last two months Truro-based Rosemullion Homes has sold three properties at its Trinity Watch development, with the site’s largest property being sold off plan for a figure in excess of £600k.

And the recent sales success has meant the Rosemullion team has had to move its show home twice in the last month.

“The successful sale of each show house has meant we’ve had to move twice in the last month.”

The development, off Higher Trewidden Road, comprises 15 new homes, four of which are affordable.

“60% of the houses on site have now been sold and we’re all extremely pleased, especially as the level of serious enquiries from people in a position to purchase has increased significantly over the last few weeks,” said Carson.

Rosemullion puts the recent sales down to both the improvement in market sentiment and the quality of the homes.

“As the UK’s Housebuilder of the Year we are continuing our policy of building high quality, individual homes in excellent locations,” added Carson.

“I think this has really helped us where other companies have suffered during the recession as people want to buy quality, whilst feeling that their money is secure.

“Also, there’s no doubt that after the last year of negative press comment and uncertainty that a growing number of people are actively coming back into the market.

“We expect competition between buyers to be intense now, as there are a limited number of homes remaining available at Trinity Watch, especially as this is the only site with detached three and four bedroom houses with excellent sea views and within walking distance of St Ives.” 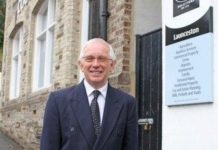